Magnum Studio-The Sound of The South 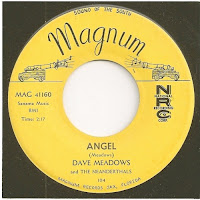 in 1960 was a sleepy southern town of 200,000 presided over by Mayor Hayden Burns. The dirty, rat infested downtown was situated on the banks of the . The riverfront was dominated by rundown wharfs and dilapidated warehouses. If you worked at minimum wage (and a lot of us did) you earned $1.00 and hour. You could buy a loaf of bread for .20, a gallon of gas for .30 and a BSA Super Rocket for less than $1,000. Less than 4 miles to the south, across the river sat a 20 X 40 frame building, yellow with brown trim. An unlikely location for history making music to be created, but this was a creative center for rock & roll, country, bluegrass & blues. Magnum Studios, home of Magnum Records was right there with industry giants like  Sun Records, ’s Motown and ’s Bradley’s Barn. 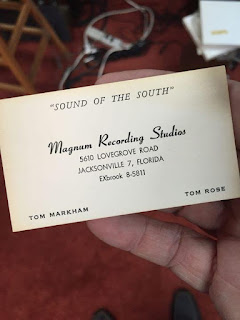 The engineering genius behind Magnum’s “Sound of The South” was Tom Markham who surpassed the rich sounds of the big NY, and studios with real echo from “the tank out back”. Tom Rose was the chief financial officer behind it all with his pay less, get more dollar leveraging system.


Probably the best way to relive that time and place is through the sounds that came out of the little studio on in .


The King Crooners: The King Crooners visited Magnum often, just to drop by and hang out. Believe me it was a special time when those guys came by. From just standing around in a normal conversation they would break into a song, complete with dance steps and perfect doo-wop harmony. A sleepy summer day turned into a Broadway musical! Great stuff!
The Last Day of School, this song shows off the Crooners acapella doo-wop style.
Ken Clark: If Ken Clark had not been so dedicated to his day job as a dispatcher for the Great Southern Trucking Company he would be a country music icon today. He was a combination of Bill Monroe & Ernest Tubb. You would have to say a little Hank Williams too be cause of his song writing talents. Ken wrote over 300 songs. Ken Clark and his band, The Boys played lots of shows and recorded for Starday Records in . He had his own recording studio but many of his records were recorded at Magnum. His signature song was Buckskin Coat which tells a tragic story of a girl who gave up the true love of a country boy for the money and prestige of a boy from town—bad decision. In Ken’s unique writing style he weaves several sub plots into the main story—it could have been a novel.

The Neanderthals made their debut April 11, 1960 with the release of Magnum Records Mag41160 45 RPM Angel. The song was written and recorded by Jacksonville's own Dave Meadows with backing and unique sound of the lead guitar of Blair Springer, rhythm guitar Jim "Big Jim" Sutton and the stand up base fiddle of Ken Hodges.  The recording soared high on the charts, particularly in Jacksonville and the South. It was favorably reviewed by Billboard and featured on a national telecast of Dick Clark's Dance Party. Magnum partnered with the National Recording Company of Atlanta, GA for distribution. Listen to the echo on this tune, provided by funnelling the sound through the "tank out back" with compliments to Harris the Welder. The Welding Shop on Wheels, $5.00 double or nothing. Yes, Angel truly exemplified the Sound of The South, the Magnum sound and Jacksonville, Fl in the 1950s.

Angel, Dave Meadows and the Neanderthals


Lewis Weber wrote and recorded another tune that was significant in the Magnum history book and symbolic of the times. Jean and Sweater of Love was the only Magnum production not recorded at the South Jacksonville studio. With the generous backing of Gertrude Doro Weber and Tom Markham traveled to Nashville to record at Owen Bradley's famous Bradley Barn (Deca Studio).  The band was one of the icon studio bands of the time, the Harold Bradley Orchestra which combined musicians from the Nashville Symphony Orchestra with country music greats like Floyd Crammer, Hank Garland and Lightning Chance. Arrangement by Cliff Parman. Published by Southern Bell Music. Released August 22nd 1960

Carter and Ralph Stanley began their career as old time musical performers right after WWII, known as The Stanley Brothers & The Clinch Mountain Clan, they were one of many bluegrass and country bands working show dates, radio, TV and recording in the 50s. When they scheduled their Magnum sessions who could have guessed that the Stanley's would become recognized as the premier example of the old time bluegrass and country music of the mountains. The Magnum sessions have become recognized as perhaps the finest recordings of the brothers and their band before the untimely passing of Carter in 1966. Here is one of the best known tunes to come from those historic Magnum Sessions, Rank Stranger

The Beachcomber captured the very essence of in the 50s.  The bar was patronized by a mixture of sailors from ’s 3 Navy bases and the young civilian crowd. Live music and dancing, one of the most popular featured bands was Frankie & the Beachcombers. Frankie and his group recorded at Magnum and their sessions were financed by record sales at the bar. The Magnum owners were frequent visitors and were always introduced as recording executives. It was a great atmosphere. Listen to a couple of their most popular recordings and relive a 50s Saturday night at The Beachcomber with Frankie Preston.